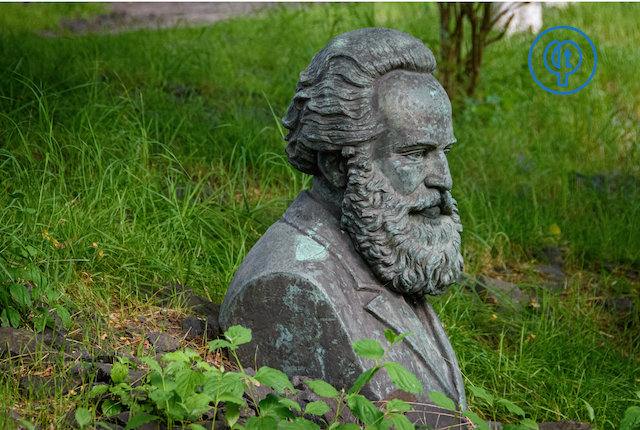 According to Karl Marx, the development of any society can be determined by looking at the means they use to produce and exchange goods. This is what he called the ‘base and superstructure’. The base refers to the economic and material conditions of a society while the superstructure is made up of the political, legal and ideological institutions that emerge from the base. For Marx, the superstructure could be changed by the base, but not the other way around.

In Marx’s view, humans are unique among animals because we are able to change our surroundings to meet our needs, a process he called ‘alienation’. This is a two-sided process. On the one hand, we change nature to meet our needs, for example by building dams to control floods. On the other hand, this process of alienation also changes us. As we change our surroundings, they in turn change us. Marx believed that the key to understanding alienation is to look at the history of how humans have changed their surroundings. He believed that all human societies have gone through three stages of history: primitive communism, slavery and capitalism. In each stage, he argued, the way we produce and exchange goods shapes our social relationships and our consciousness.

The first stage, primitive communism, was a time when humans lived in small groups and shared everything they had. There was no private property and no class divisions. Everyone worked together for the common good. The second stage, slavery, emerged when some people began to own others as property. This led to the development of classes, with a small group of rich people at the top and a large group of poor people at the bottom. The third stage, capitalism, is the stage we live in today. In capitalism, the means of production are owned by a small class of rich people, who use them to make profits. The rest of us are forced to sell our labour power to them in order to survive.

This system leads to alienation in two ways. First, we are alienated from the means of production, which means we have no control over our work or our working conditions. Second, we are alienated from each other. In capitalism, we are pitted against each other in a competition for jobs, wages and resources. Marx believed that capitalism was not the final stage of history. He believed that capitalism would eventually lead to its own downfall. This would happen because the system would create more and more wealth for a small group of people at the top, while the majority of people would become poorer and poorer. Eventually, Marx believed, the poor would rise up and overthrow the rich, leading to a new stage of history, socialism. In socialism, the means of production would be owned by the whole community, and everyone would share in the wealth they produced. This would lead to a society without class divisions or alienation.

Marx’s ideas about society and history have had a profound impact on the way we think about the world. They have shaped the thinking of many different political movements, including environmentalism. environmentalists often talk about ‘the destruction of the natural world’. This is something that Marx warned about. He believed that capitalism was leading to the ‘ plundering of the Earth ’, as the rich sought to increase their profits by extracting more and more resources from the planet. Marx thought that the way to prevent this destruction was to overthrow capitalism and replace it with socialism. He believed that socialism would lead to a more sustainable way of living, in which we would produce what we need without damaging the environment. Marx’s ideas about alienation can also help us to understand the environmental crisis. In capitalist societies, we are cut off from nature. We work in offices and live in cities, and we no longer have any connection to the land or the natural world. This separation from nature makes it easier for us to exploit and pollute the environment, because we do not see it as part of our own community.

Marx’s ideas can help us to understand the environmental crisis and to find ways to solve it. But we need to be careful not to over-simplify his ideas. Marx was a complex thinker, and his ideas cannot be reduced to a simple formula. But if we take the time to understand his ideas, we can use them to build a more sustainable and just world.

Next post Why Science needs Philosophy? An argument for ‘Philosophy of Science’