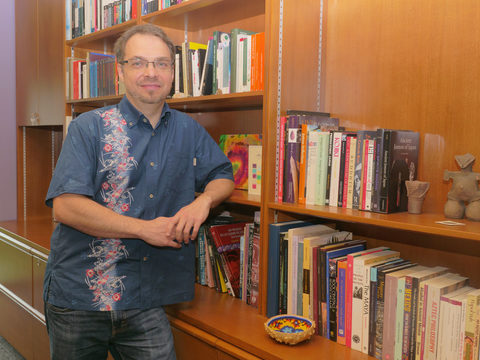 What is the mind? For thousands of years, philosophers, religious figures and scientists have tried to answer this question, but so far, the nature of the mind has eluded understanding. In the field of cognitive science, one idea that gained traction in the mid-20th century is the computational theory of mind, which posits that the mind acts as an isolated computer, with the brain receiving and processing inputs from the environment and producing specific actions and interactions as outputs.

But Professor Tom Froese, who leads the newly formed Embodied Cognitive Science Unit at the Okinawa Institute of Science and Technology Graduate University (OIST), is challenging this hypothesis. His project team is exploring the concept of embodied cognition, where the mind is not only based on the brain, but also extends into the body and the environment.

The value of interactions in embodied cognition is what initially drew Prof. Froese towards this theory.

He argues that if cognition is not embodied and the mind is limited to what happens in the brain, this means that an individual’s entire life, full of social interactions, can simply be reduced to neural activity. When taken to the extreme in thought experiments, all of human experience could instead be achieved by an advanced supercomputer feeding simulated inputs to a brain suspended in a vat.

“For me, this is a deeply unpleasant implication; I think real-life social interactions matter immensely,” said Prof. Froese. “Currently, no-one has been able to experimentally prove that this is how the mind works. So, in this neutral space, we might as well try and test the more satisfying theory of embodied cognition instead.”